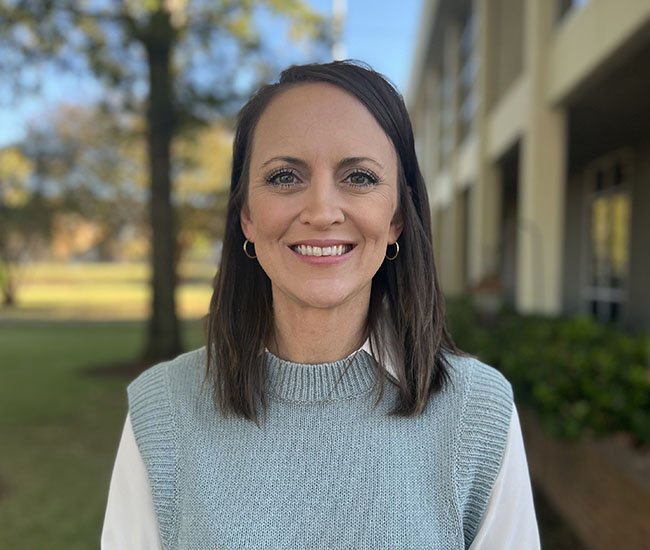 SS&A is proud to announce Kathryn Helms has joined our team as Comptroller. An Auburn University graduate, Kathryn received a bachelor’s degree in Secondary Mathematics Education in 2010, moving on to teach math at Brewbaker Technology Magnet High School in Montgomery for the next eight years. In 2014, she returned to night school at AUM where she received a secondary bachelor’s degree in accounting and has since continued to take several graduate-level accounting courses in preparation for the CPA exam. Kathryn recently passed the first of the four CPA exams and plans to become fully licensed in 2023.

“Though teaching was a very rewarding career, I did not feel professionally fulfilled. I am very goal and detail-oriented, so I felt accounting was more suited to my personality. I like the challenge that accounting provides. Having spent so much time in and around sports, I have always worked hard to be a valuable team member at work, and I’ve always had the desire to ‘serve’. I love that accounting has allowed me to use my specific skill set and knowledge to serve my coworkers and clients.” With her strong public accounting expertise and experience, we’re confident Kathryn will have many opportunities to continue to serve others here at SS&A.

Originally from Montgomery, Kathryn and her husband Tyler currently live in Opelika with their two children, Sophia (8) and Hudson (3). Coincidentally, this will not be Kathryn’s first time here at SS&A. She worked in our production department the summer after high school, during which time she observed coworkers love their jobs, build their careers and create meaningful bonds with one another. “I knew that working for SS&A would mean working for a company that takes pride in the work they do and also values their employees.”

Kathryn, we are excited to have you join our team! 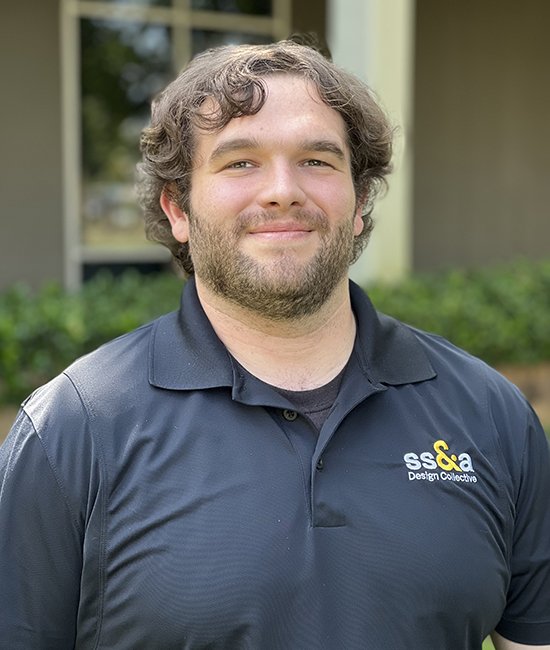 SS&A Design Collective is proud to announce Caleb Rudolph recently passed the Principles and Practice of Engineering exam (PE). As one of SS&A’s electrical engineer interns, Caleb will continue supervised training until he has acquired the necessary experience under a licensed engineer to gain his PE licensure.

During college, Caleb began working at SS&A as an Electrical Design Intern in the summer of 2019, and again in the summer of 2020. He continued as a part-time intern through the fall of 2020 and, upon graduation, was offered a full-time position with the firm.

When asked about his experience with the company Caleb replied, “I have been blessed to be mentored by a group of talented and experienced engineers. They have given me every opportunity to learn and grow and I am confident that their mentorship and the work I have done at SS&A will have prepared me for getting my license in a few years.”

SS&A is so proud of the strides you have made in your career, Caleb, and we look forward to celebrating your next milestone! 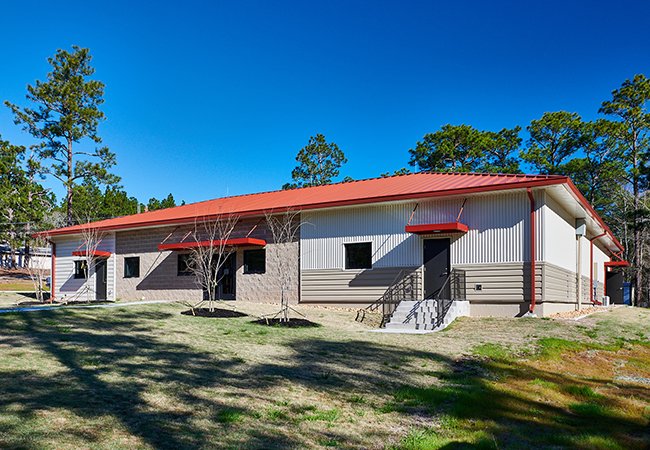 In partnership with PageSoutherlandPage, the Addition / Alteration of the Vet Clinic, Building 500, at Ft. Gordon, GA is now complete. The renovated Vet Clinic expanded and upgraded the original 1967, single-story facility that provides treatment and care for Military Working Dogs and household pets. The addition/alteration is a complete demolition and renovation of the building’s interior, with a refresh of the building’s exterior, including new doors, windows and canopies.

Follow the link below to learn more about this project. 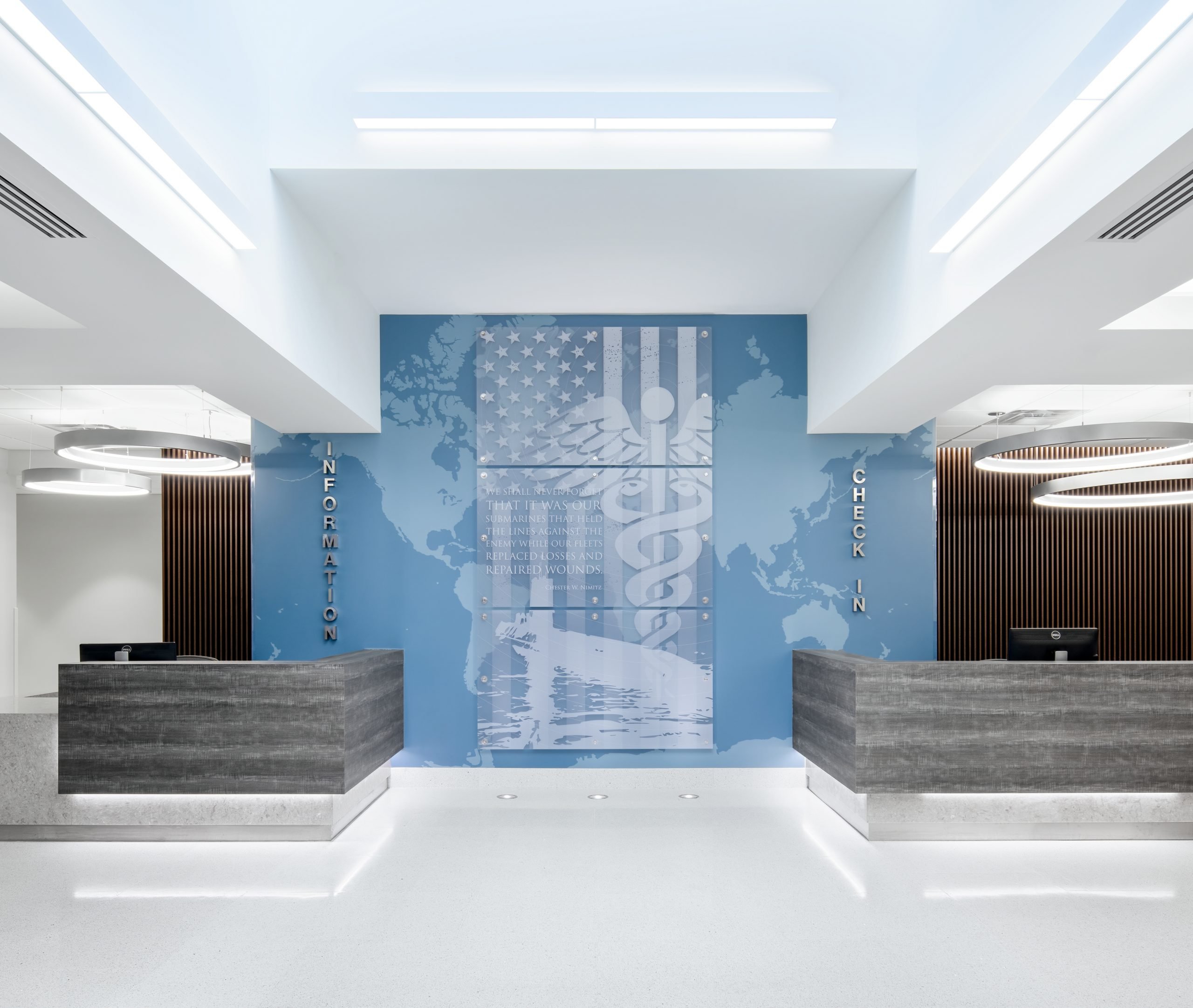 In partnership with Clark Nexsen, the Medical Homeport Renovation of Building 449 at Naval Submarine Base in New London, CT is now complete. SS&A provided the Medical Planning, Medical Equipment Planning, and Electrical Engineering services in the 57,128 square foot renovation. Design began in 2017 which included phasing the facility to remain fully operational throughout the 5-year construction duration. SS&A and Clark Nexsen recently completed a post-occupancy design evaluation with patients and staff of the Medical Homeport and are pleased to report overall satisfaction with both the design and construction process. Thank you to our team members at Clark Nexsen, NAVFAC MIDLANT and staff at Navy Medicine Readiness and Training Unit Groton for a successfully completed project.

Follow the link below to learn more about this project. 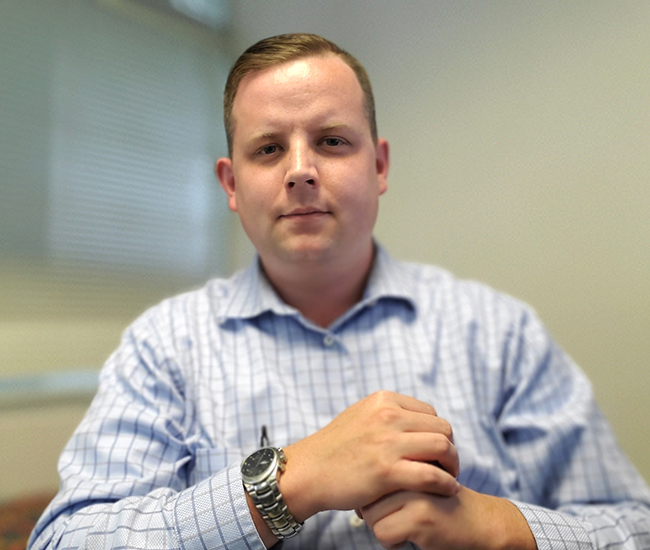 SS&A is so proud of the strides you have made in your career, Austin, and we look forward to celebrating the ingenuity and depth you continually bring to our team. 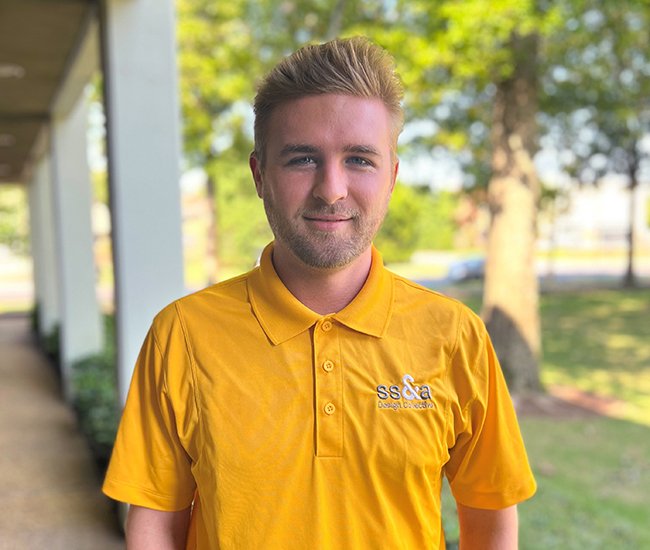 Previously studying at Troy University Montgomery, Ian holds a CompTIA A+ Certification and a Microsoft AZ-900 Certification for Azure Fundamentals. His experience includes working for the Leadership Development Course (LDC) at Maxwell AFB as a Technology Integration Specialist and Caddell Construction Co. (DE), LLC as the IT Help Desk Administrator.

Choosing SS&A because of how well they take care of their employees, Ian will be a vital asset to our IT department, supporting all the technology that is crucial to our company’s success.

In his spare time, Ian spends time with his 6-year-old daughter, Frances who will be attending Montgomery Academy in the Fall.

Welcome to the team, Ian! 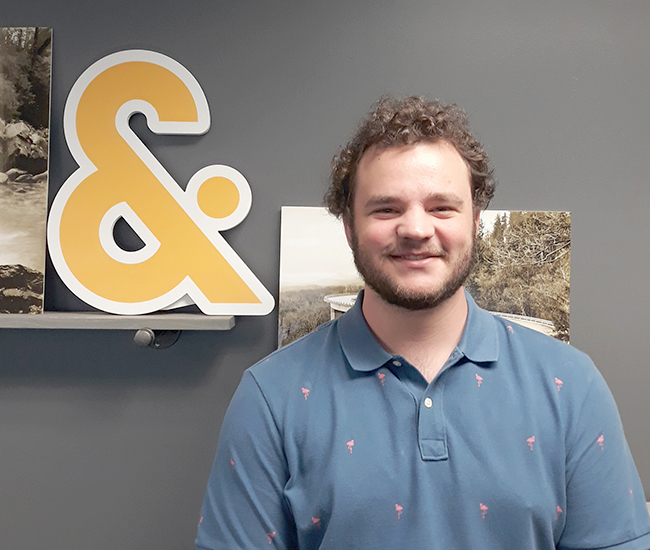 SS&A would like to welcome 2022 Summer Mechanical intern Andrew Ledden to the team! Andrew is currently studying at the University of Tennessee Knoxville and will be graduating in May 2023 with a Bachelor’s degree in Mechanical Engineering.

“Since I was young, I have always been interested in putting things together and bringing ideas to fruition. As an engineer, it is possible to take much larger projects and make them real. The initial brainstorming that goes into the design process is my favorite. I enjoy collaborating with others to hear their ideas and thoughts about a problem.”

Andrew is looking forward to the knowledge he will gain from our SS&A mentors, especially getting practice with the software our engineers use. In his spare time, Andrew enjoys hiking, playing the trumpet, and playing video games.

Welcome to the team, Andrew! We look forward to learning from each other this summer. 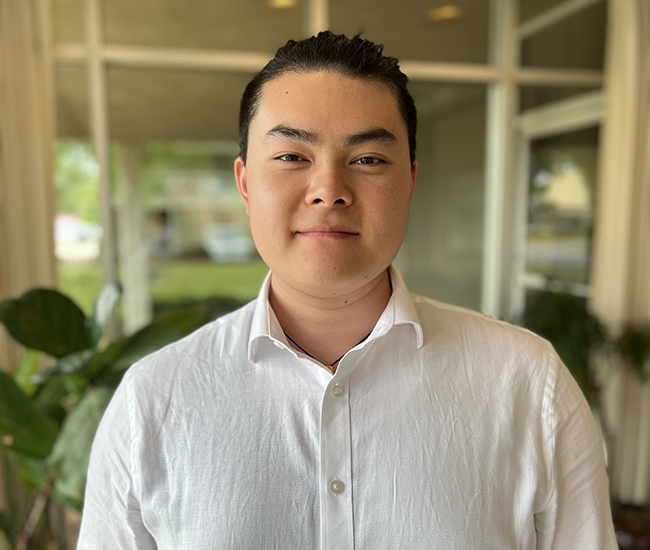 SS&A is pleased to welcome 2022 Summer Architectural Intern Deliang Chen to the team! Deliang is currently studying Architecture at Auburn University with a minor in Business and is scheduled to graduate in May 2023.

Deliang has been on the path toward becoming an architect since 5th grade. It all stemmed from his curiosity about how buildings were made and how they “worked.” These thoughts eventually led to him wanting to design buildings of his own.

First learning of SS&A through a mentorship program hosted by AIA, Deliang was immediately drawn to the project opportunities and work environment SS&A has to offer, but most importantly, by the SS&A team members he had met so far. Shout-out to Travis Krimmel!

Welcome to the team Deliang! We look forward to mentoring, sharing, teaching, and learning from you this summer. 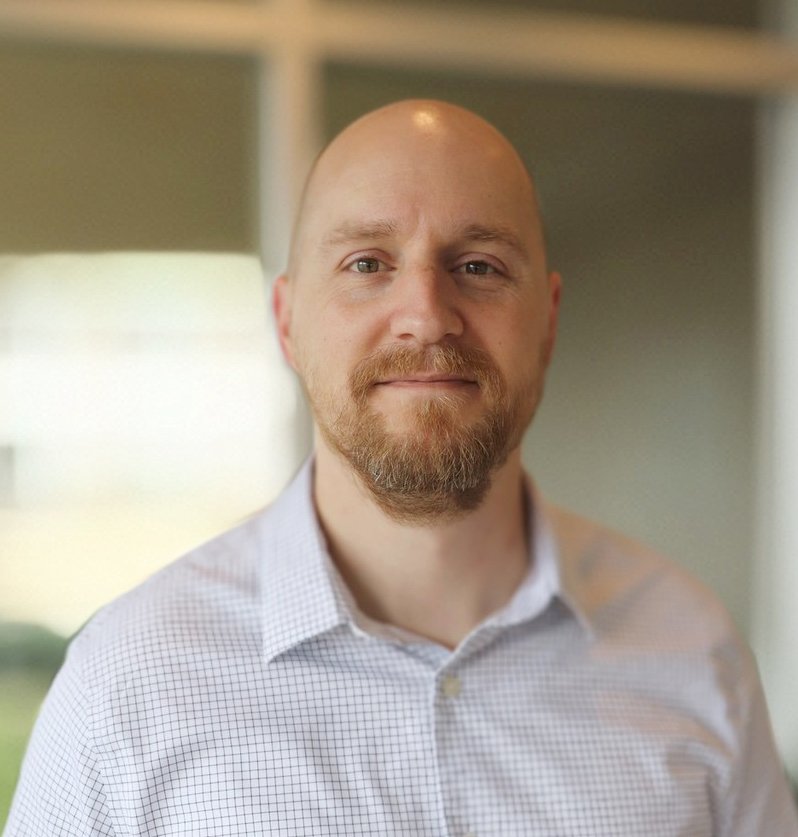 SS&A welcomes Joshua Barto to our team as Medical Planner/Medical Equipment Planner. A 22+ year Army veteran, Joshua has over two decades of experience working in the Healthcare Technology field as a Biomedical Technician, Operations Manager, Healthcare Technology Director, and Medical Equipment and Clinical Planner. In his role at SS&A, he will be responsible for identifying clinical and equipment requirements and working to ensure our designs synchronize with our clients’ visions.

When presented with the opportunity to train as a Biomedical Equipment Technician in the Army, Joshua jumped at the chance as it sounded different and interesting. Since then, he has moved up the business food chain and branched into other occupations in which he can leverage his experience and knowledge. He has always been interested in learning how things work.

Joshua’s favorite part of the design process is working with project stakeholders, identifying and refining their operational requirements and developing potential solutions. When asked why he chose SS&A, Joshua replied, “largely because of the type and quality of work performed in designing and studying federal healthcare requirements.” Welcome aboard, Joshua. We look forward to watching your continued growth! 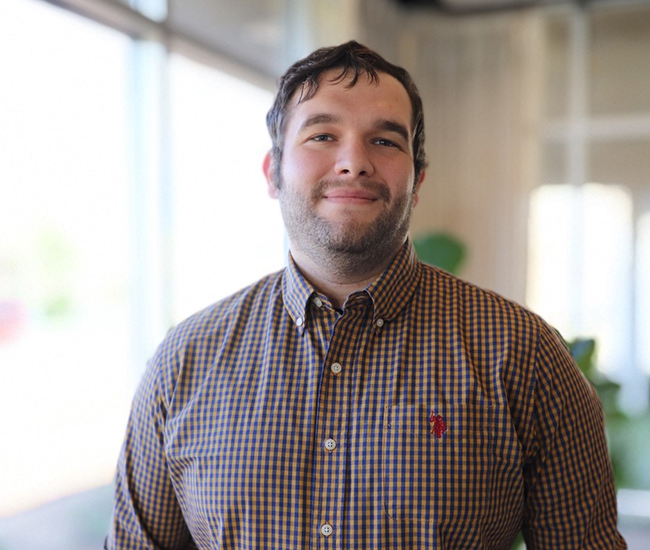 SS&A Design Collective is proud to announce Caleb Rudolph recently passed the Fundamentals of Engineering (FE) exam. Caleb has been with the company for just over a year as an Electrical Designer and has already proven to be a valuable member of our team. Congratulations on completing the first step on your path to becoming a professional licensed engineer (PE)!